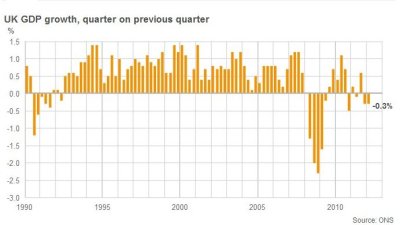 According to official figures

published on 24th May 2012, UK gross domestic product (GDP) in volume terms decreased by 0.3% in the first quarter of 2012, revised from a previously estimated decline of 0.2%.

It confirms that the UK has entered a double-dip recession.  The definition of recession is 2 consecutive quarters of falling output.  This followed a contraction of 0.3% in the last three months of 2011.

The latest data for furniture manufacturing shows that for the same 1st quarter period, when adjusted for seasonal variations, furniture production was down by 2.7% on the 4th quarter 2011.  This fall in fact shows that furniture production has suffered 3 consecutive quarters of decline and compared to one year ago it is down by 7.9%.   If we compare the levels of production now with the beginning of 2008, just before the initial recession began, it has declined by 16.4%.

Data is also published witohut adjustment for seasonal variations - see graph on right - and this shows a fall in furniture production of 5% in the 3 months to the end of March this year compared to the same period last year.