A joint survey undertaken NEPCon and Timber Trade Federation (TTF) (released 3 December 2012) found that three months from the implementation date for compliance with the EU Timber Regulation some companies were still at risk of non-compliance.

Companies that import timber or timber products from outside of the EU, known as ‘first placers’, will be most affected by the new law.

The survey reveals that businesses that had not heard of the EUTR were all smaller firms with annual turnovers of less than £3.2 million, highlighting the challenges facing small businesses. In line with this trend, of those that had heard of the Regulation, there was a marked decrease in understanding of the obligations among small-to-medium sized businesses. 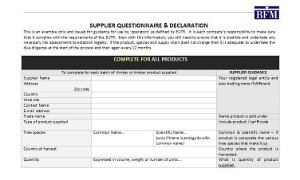 The survey found that those that had taken strategic steps by developing a timber sourcing policy were now focused on staff training, awareness raising, supply chain mapping, development of a due diligence system to strengthen the operational efficiency of that policy.   However, there were a number of respondents that were unaware of the need to establish a due diligence system – a central requirement of the EU Timber 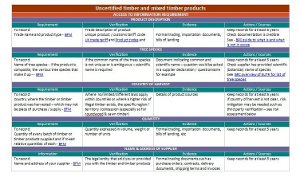 Regulation. Conducting risk assessments and establishing systematic risk mitigation procedures needed to minimise the chance of illegal timber entering the supply chain are a relatively time-consuming process and these companies are in danger of not meeting the 3 March 2013 deadline.

What has BFM done and what is it doing?
•    Introductory seminar – September 2012 (supported by the Timber Trade Federation (TTF))
•    Workshop on implementing the EUTR – December 2012 (members only) – Jointly with AIS
•    Web site – advice, guidance, including checklists and supplier questionnaires/declarations (members only)
•    Engaged a consultant to provide support to members

In addition to working closely with the TTF, the BFM has also forged partnerships and negotiated discounted rates for member companies with PEFC and the Soil Association. We are also in close liaison with the Head of Sustainability at the BRC.